Robotic Process Automation (RPA) is a billon dollar software and services market being actively leveraged by large organisations (including universities) to make administrative processes more efficient and effective. RPA is just one example of how traditional IT systems and development are not sufficient for contemporary digital transformation/innovation. Especially when it comes to an activity as diverse as learning and teaching. A problem which learning technologists, educational designers, and others involved in university L&T have been working around for years. This work has typically occurred in spite of institutionally approved processes. Work that is necessary not just because it works around inefficient or ineffective systems but because it is also seen as key to enabling the creative recombination of the technical and social components of contemporary digital infrastructures necessary for digital transformation (Leonardi, 2011; Yoo, 2013)

The following introduces RPA and explains why after years of expensive enterprise information systems it is required. RPA is then positioned within the broader idea of lightweight IT development. This is positioned within university L&T through an example of work we’re doing as part of an LMS migration (Blackboard Learn to Canvas). Other examples from the Canvas community are then used to argue that within universities RPA and its like needs to broaden appropriately. Its formal organisational application needs to move appropriately beyond just administrative tasks. Its application in L&T needs to move appropriately beyond the “lone rangers” playing in the shadows toward becoming an integral part of how universities strategic approach to contemporary L&T.

Robotic Process Automation (RPA) is a label applied to software that can emulate how humans interact with software. RPA software can click menu items and buttons, open windows, “type” in information, “read” other information, and make decisions about what to do next based on that data. RPA software can do most of what a human can do with other software - hence “robotic”. Most RPA vendors also claim the magic ingredient of AI adding to the “robotic” flavour. RPA software supports the creation of “scripts” of direct the “robot’s” activities. Scripts that can be repeated without human intervention as often as required - hence “process automation”. If you’re doing a software intensive task once, you probably don’t need RPA. If you’re performing the task 20+ times every Monday morning RPA can save time and hassle.

The Google Books Ngram viewer has “robotic process automation” first appearing in 2012. A recent media release estimates the 2021 RPA market size at $USD2.65 billion suggesting it will grow to $USD23.9 billion by 2030.

Consulting companies have been writing descriptions of how universities can use RPA “across the student value chain”. Universities have projects using RPA, e.g. the University of Melbourne, the Australian National University, Griffith University, and the University of Auckland. However, almost all visible/espoused use of RPA in universities appears focused on administrative processes such as financial reporting, HR, and admissions. Not learning and teaching.

van der Aalst, Bichler & Heinzl (2018) introduce RPA and describe its place within the much broader and longer history of process automation with digital technologies. A part of that description uses the following diagram to position RPA and traditional process automation along the “long tail of work” (suggesting a Paeto distribution). They suggest that traditional process automation - typically large scale information systems projects - address the large number of cases that use the same structured process (the left-hand end of the graph). Where there’s an economy of scale. At the other end of the graph are processes that can only be done by manually people. They are too infrequent and ad hoc to be efficiently or effectively automated.

This leaves a lot of cases in the middle of the graph. These cases involve (often painfully inefficient) repetitive work. But can’t be automated because the cost/benefit trade-off doesn’t work. There’s not quite enough of these cases to justify large enterprise process automation. In particular, when these cases often rely on proprietary or legacy information systems that enterprise automation can’t work with. Traditional process automation - like all traditional enterprise information systems - require long and expensive implementations resulting in relatively inflexible systems, whereas RPA aims for “quick wins that require little investment” (van der Aalst, 2018, p. 271). There is a mismatch between the purpose of enterprise automation tools and the purpose of RPA. 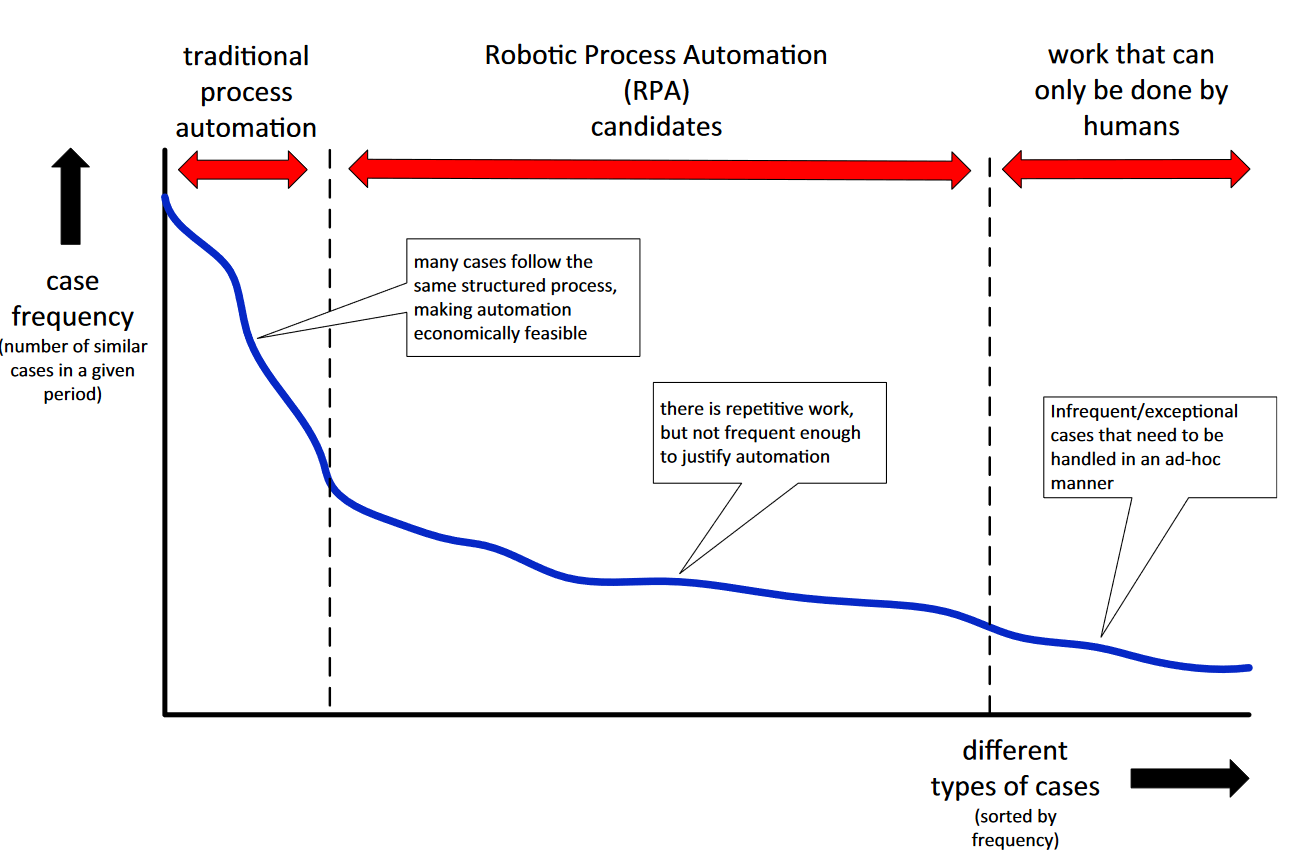 The “citizen developer” label beloved of Gartner and Micrsoft (PowerBI, PowerAutomate etc) is another example of lightweight IT. Further evidence that vendors and organisations are increasingly recognising the need and value of actively supporting what used to be labelled as feral or shadow systems.

Where I currently work we’re in the process of migrating from Blackboard Learn to Canvas. I work with one part of the institution responsible for migrating 1400 courses (some with multiple course sites) over 18 months. As you may imagine, LMS migration is an important project with much of the organisation expending effort to make sure it succeeds. This includes heavyweight IT through the new LMS vendor, our organisational IT division, and various other enterprise systems and practices. For example, the common cartridge standard for exporting content from one LMS to another; and, the Learning Tools Interoperability (LTI) standard for establishing “one-click, seamless” connections between an LMS and external learning tools. All should be good, right?

The notion of umwelt from cybernetics. The idea that enterprise software’s umwelt is for a certain type of problem. Perhaps the not type of problem that we now need to solve in L&T. Or pointing at the type of problem which enterprise L&T has ignored/been incapable of dealing with e.g. the following

Currently we’re working on migrating ~500 Blackboard course sites. Echo360 is used in these course sites for lecture capture and for recording and embedding other videos. Echo360 is an external tool, it’s not part of the LMS (Blackboard or Canvas). Instead, the Learning Tools Interoperability (LTI) standard is used to embed and link echo360 videos into the LMS. You might assume that because of LTI and common cartridge exports you could just export content from Blackboard, import it to Canvas, and through the magic of LTI all would still work. You would be wrong.

If I use Blackboard’s Echo360 LTI plugin to embed an echo360 video into Blackboard it will use a very specific id (e.g. f34e8a01-4f72-46e1-XXXX-105064c3f75f). If I use the Canvas Echo360 LIT plugin to embed the very same video into Canvas it will use a very different id (e.g. 49dbc576-XXXX-4eb0-b0d6-6bbeaa800707). That is, for each echo360 video embed you wish to migrate from Blackboard to Canvas you need to regenerate a new id. Reinforcing that the purpose of LTI is to connect a particular LMS to a particular external tool. The purpose of LTI is not to make it easy to migrate content from one LMS to another.

Question Can I get a graph of courses with echo360 videos in DW2?

Manual solution. The “RPA” solution - but someone still needs to manually gather the list of video titles in a course. Send it to someone with permission and get the response back and then integrated into Canvas

This type of work is not new, I imagine there are staff all over doing this work which a quick look at github and Canvas community forums confirms.

“RPA” as part of digital transformation

Scott talks about “vary widly between disciplines and institutions”….touch on this

Migration is a one-off process, but these requirements will continue…something about purpose and assemblage